The Head at Sumburgh 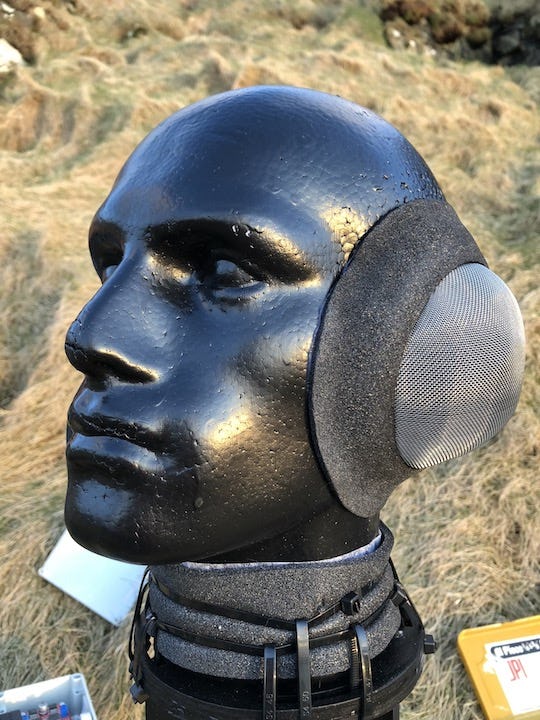 Judging from the comments on the ambient sound from Cliff Cam 3 it would appear that it’s been well accepted. Phew! Somewhat of a relief considering the amount of time (and money) that has gone into this recent addition to the Shetland Webcam Network.

You are listening to true BINAURAL SOUND…and it’s from Shetland! (Geeks Go Google)

Personally, I have had headphones on for the last two hours (sad really) and have found myself totally immersed in the sounds coming from the cliffs…and the sea…as the seabirds silence themselves for the darkening hours ahead.

Live sound on Shetland Webcams has been an absolute headache since it was first attempted around 3 years ago. We used a Berocca Tube (another Aussie influence KimG) with plenty foam and a really, really cheap microphone that should have died within weeks…it lasted years unfortunately!

It was embedded in the stone wall and fingers were crossed. It worked but never really impressed (us). It did, however, act as some form of modern Shetland art, with some people arranging to ‘speak’ or ‘sing’ to a “private” audience. Something (or things) chewed through the cables numerous times and yet we kept repairing the irrepairable and always vowed to do better.

What you don’t know is that all the audio engineering has been the sole responsibility of technical guru, Iain Waddell. Normally Iain’s biggest headache is getting sound just right for really important people who make money as musicians and perform at major events where people pay serious money to be entertained. Iain has worked with me behind the scenes for a number of years trying to turn my seriously challenging ideas into some sort of reality…. usually with a well-meaning, and firmly delivered, reality check for my own sanity. I could not deliver this step-change to the network without his enthusiasm and technical abilities. Thank him - not me!

Over the last few weeks many strange items have been delivered to an address on the east side of the island that really should have raised alarm bells somewhere. It all came together on Thursday evening as a brief period of “calm” descended on the cliffs. Risk Assessment completed, it was decided to rendezvous at 1800 local time at the ‘Lighthouse Hotel’ but we needed to make sure the cameras were pointing north - earlier than usual - just in case Gradon or Neil noticed something suspicious and alerted D.I. Jimmy Perez.

Since the failure of one of the original cameras we did have a cabled facility to allow us to attempt sound experimentation with Iain’s new ‘creation’. Years of rust caused the loss of some of our personal pocessions… namely my prized socket-set that was quickly destroyed in front of my eyes in the name of getting Loganair’s SAAB aircraft sounds captured for Robbo.

As the sun began to set a little further north than the night before the technical tests (working out LEFT from RIGHT) began with a ritual of walking around a pole whilst facing the ocean and using sign language to someone (me) wearing headphones from a place of safety…. but answering a question asked many seconds ago…. the geeks will work this one out 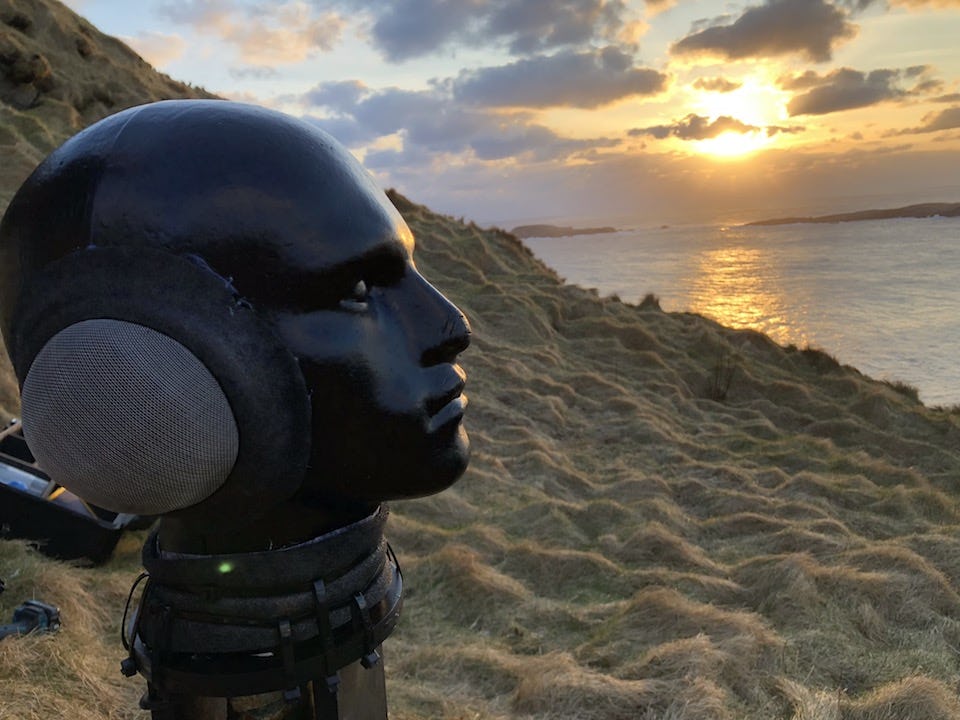 Its, 2100 local time and we finally had the best sound ever from the cliffs at Sumburgh.

Not quite the Easter Island statues….

So, if you want to head south to the Lighthouse this year we can 100% guarantee that you will be able to see SUMBURGH HEAD looking (approximately) northwards in search of the Northern Lights but listening carefully to the sound of our natural environment that you really only take for granted when you are actually immersed in it.

Our Crowdfunding Campaign begins later today and I do hope that as many of you as possible can financially support the continuation of this project that means so much to me (and you I hope). I may be the name associated with Shetland Webcams but I do have some really talented people supporting me that want to make this work too and they have devoted so much personal time and finance into making the experience even better for you all.

This project sums up the Shetland Community and its why we are all proud to call Shetland our home. Over the years this network of views from a remote island community has brought so many people together and many friendships have been established. As a community of approximately 23,000 people we are privileged to have so many of you actively contributing to Shetland via this platform.

…and we will reward those who work this out….